Terry has asked me to say a few words. The words are mine, but I hope they may reflect, in some small way, Terry's own thoughts. Here perhaps I'm repeating some of the priest's words that I didn't quite understand - one of Gigi's few failures was her attempt to teach me Italian...

Gigi's death is a great and terrible loss. A loss to Terry. A loss to Maria Grazia and Anna Maria. A loss to all her friends. But it's also a loss to the world. Most of us are a mixture of the good, the bad and, well, something in between. But to meet Gigi was, in some extraordinary way, to meet pure goodness. To say this is to say more than the normal generous rhetoric of the funeral oration.

I knew Gigi for many years, a long time, though not as long as some people here today will have known her. And throughout all those years, however hard I tried, it was impossible to find anything to criticize in Gigi. 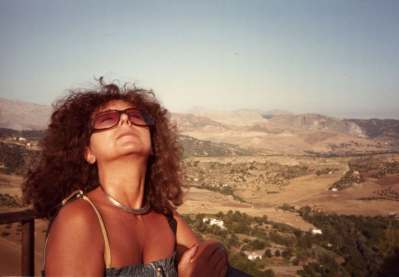 Gigi was generous. In fact she was, somehow, selfless - all the more striking for someone whose professional preoccupation was the Self. Here in Italy she founded the Centre for Self Analysis. But for long before that she'd been the leading light of the self-processing movement. Her aim was always to give power to the patient, not power to authority.

Gigi was exuberant. She was always ready to listen and to help. She was full of the joy of life. She was a life-force.

In Scotland - where Terry and I both come from - there is a common word used to describe anything really wonderful; you say, simply, that's 'magic'. Well, Gigi was magical, she was 'magic'.

She had her contradictions: she was innocent, yet wise. She was beautiful and yet without vanity. And from London's smallest kitchen she prepared London's best meals. Well, she was Italian.

Together with Terry she led an adventurous life. A life full of travel, full of questing and questioning. A life free of bourgeois greed, of the need to accumulate possessions. A life full of fun. We shall never forget her laughter.

Just before leaving London yesterday I received a message from a friend who really hadn't known Gigi at all well. Yet what he wrote summarized exactly what so many of us felt about Gigi. My friend wrote:

'I only met Gigi four times, and she was so very bright, so full of grace and elegance. On each occasion she raised my spirits and the spirits of those around her'.

That's what he wrote. And it's true. That was Gigi. No false packaging. No presentation. Just a simple goodness lighting up the lives of everyone who knew her.

Death will not put out that light, not for her family, not for her friends. It's a light that will continue to illuminate Terry till the end of his days. Because the story of Terry and Gigi is the story of a great love. And such a love has no end.